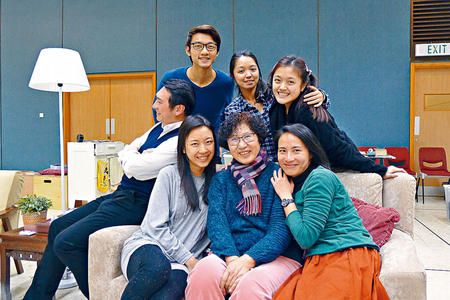 It is not easy for parents and children to understand and tolerate each other. Simple as living habits cause conflicts, and improper handling can even destroy the relationship. The performance “Brighton Beach Memoirs” by POP Theatre moved the American classic comedy “Brighton Beach Memoirs” to Hong Kong in 2003. The protagonist Wu Lung Bo, who was in his adolescence, was curious about sex. He was misunderstood by his family and was greatly troubled. When the society was filled with panic because of SARS, his father became unemployed. The family of seven had to learn to put themselves in the shoes. Parents can reflect on the parent-child relationship with their children through the play.

“Brighton Beach Memoirs” was produced by American dramatist Neil Simon in the 1980s,  which has been performed many times around the world. The story is about the survival of a Jewish family living in New York under the Great Depression of the 1930s. Elsie learned that POP Theatre will perform the play. They invited Director Fu Yuet Mei, who has rich experience in the theatre and won the “Best Director Award” of the Hong Kong Drama Awards twice.

She said that the story tells what happened to two families within a week. The fifteen-year-old protagonist, Wu Lung Bo, originally lived with his parents and elder brother. Later, his uncle passed away, and his aunt brought two daughters to come to seek refuge. In order to support a family of seven, the father had to work part-time after getting off work, and the brother had to start working to support the family after his graduation. “Wu Lung Bo is good at study, which his goal is to become a writer. However, he did not know how to overcome troubles as he is too young. One day, his father suddenly lost his part-time job, and the family began to face financial pressure, which a series of conflicts appeared.

Fu Yuet Mei pointed out that this is an adapted version. The basic story is the same as the original, but the protagonist’s family is changed from an American Jew to a Vietnamese overseas Chinese in Hong Kong. “They have to face the problems of social integration and economic recession at the same time. With the background of 2003, the economy was very poor due to SARS. Many people had negative equity and went bankrupt, which is close to the economic recession in the 1930s.”

She also revealed that she had directed the play ten years ago, but this time she was exposed to the adapted version and still feel fresh. Since New York in the 1930s was very different from Hong Kong in 2003, many details must be carefully studied to stay persuasive. “The protagonist of the original book uses radio to receive information, but no matter how poor it is in Hong Kong, it is impossible to only listen to the radio. So, we switched to a TV that malfunctions from time to time. If dad wants to make quick money, he can be a night taxi driver in Hong Kong. These are the results of the crew’s efforts to collect information and group discussions.”

Taking Hong Kong as a background and adding details can certainly increase the persuasiveness, but the focus of the drama is still how the family can help each other in a difficult situation. Fu Yuet Mei revealed that each character has different worries. Like the father; he needs to drive a night taxi to help make up his income. The elder brother was righteous and offended the boss for his colleague. He was almost fired, but he could not lose his job. “The whole drama is very life-oriented, but there are also many conflicts. For example, when the brother was in the most financial constraint, he thought of gambling to make quick money. Of course, he was unsuccessful, and he was afraid that his parents would discover that. The two brothers would have to find a way to cover up. Although the title of the play is “Brighton Beach Memoirs”, I think the male is not the only protagonist. Middle-aged characters such as parents and the aunt have also grown up after facing SARS and unemployment problems. Everyone learns to understand each other – they changed the attitude of being a person and doing things.”

Wu Lung Bo has good grades, but his parents are less concerned and affected the mother-child relationship. “His mother often scolded him for not tidying up, and thinks that he is not hard working. In fact, he is actually sensible and highly capable of taking care of himself. The mother often asks him to do things, which makes him doubts whether he is the real son of his parents or not. I believe many young people have had similar thoughts.” Fu Yuet Mei said that in addition to family relationships. As a teenager, Wu Lung Bo was also curious about sex, and there were a lot of jokes with his family.

The neglected male protagonist was annoyed, but parental overdoing can also cause problems. Fu Yuet Mei pointed out that the two maidens, the aunt and her little daughter, have typical “Princess Syndrome.” “Auntie was regarded as a little princess by her family since she was a child, but when something happened in the family, the mother felt that the aunt did not care about what the family was facing. There were a lot of quarrels. The aunt naturally treated her younger daughter like a princess, and led to the eldest daughter’s unhappiness.”

Although there are a lot of misunderstandings and conflicts, Fu Yuet Mei told Elsie to take her children into the theatre with confidence. “This is a comedy, so it ends with a happy ending. In fact, Neil Simon has included a lot of personal experience into the play. He do not have a happy childhood, so he decided to spread joy through the theatre. The audience can learn to solve family problems. It also allows parents to reflect on whether they have spoil their children or being too harsh to them.

Elsie would like to remind everyone that the “Brighton Beach Memoirs” will be performed this Friday at the Tuen Mun Town Hall Cultural Activities Hall from March 18th to 20th, and from 25th to 26th. Tickets are now on sale on Urbtix. For details, please visit http://www.poptheatre.info/