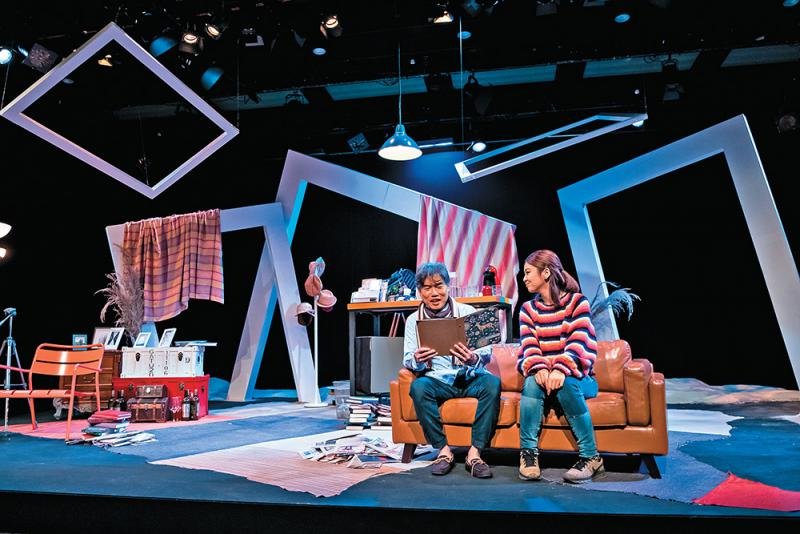 Picture: The father and daughter began to re-establish the relationship. The father looked at his daughter’s life photos.

Following the “Brighton Beach Memoirs” about two years ago, Pop Theatre once again invited Szeto Wai Kin to translate and adapt American playwright Neil Simon’s another work – “I Ought to Be in Pictures” (Director Lau Shek Yin). The method of adaptation is still to turn the story setting from the United States into Tuen Mun. The story mentions the protagonist Tang Sze Yu (played by Cheung Man Ka) came from Penghu, Taiwan to Cafeteria Beach in Tuen Mun, and went to find her father Tang Sai Him (played by Chan Wing Chuen), who she has not met since the age of three. Hong Kong-produced films, experiences of working in the Mainland, and the situation of rising property prices in Hong Kong were mentioned in the story, making “I Ought to Be in Pictures” a Hong Kong original drama instead of a translated drama. It is a play that made the audience feel cordial and resonate.

Turning an American drama into a Tuen Mun story

From the context that “a daughter had to fill in the gaps in getting along with her father who had not seen for many years”, it is obvious that the script of “I Ought to Be in Pictures” is divided into two phases – “characters’ current situations and mood descriptions” and “characters’ past and background descriptions”, which were in perfect harmony.

The current characters’ situations and mood portrayed from the time when the daughter saw her dad had a cohabiting girlfriend – Chiu Mei Mei (played by Chan On Yin). At that time, Tang Sai Him was not able to recognize her daughter, but then the father and daughter got to know each other during their time in the Cafeteria Beach residence. Although the daughter had made several complaintsabout her father’s abandonment of the family (Cheung Man Ka’s acting clearly revealed her agitate and depression), the quarrel only lasted for a short time. The father resolved his daughter’s grievances and anger with sincerity and action (to find his daughter who suddenly fled after reuniting). The audience could feel that Chan Wing Chuen sincerely interpreted the guilt that the character had hidden for many years.

Reunited after a long absence

Most of the scenes in “I Ought to Be in Pictures” are written by the screenwriter with relaxing and humorous attitude. Indicating the harmonious atmosphere between the father and daughter, helps convince that the daughter Sze Yu was not seeking her father vengefully, but wanting to understand more about the life and personality of her father (Tang Sai Him was a well-known photographer, and his daughter had learned a small part from his father’s photo album or other channels), and also hoping her father to know more about herself, her younger brother and her mother’s life in Taiwan. Of course, the audience also discovered that Sze Yu, who was eager to develop a modeling career in Hong Kong, expected her father to help her.

The focus of the play is about willingness to share, understanding, and encouraging family affection. Sze Yu’s reunion with her father was not a selfish intention of “utilizing her father’s popularity to become famous”. Of course, Sze Yu asked her father to share his love experience was not to criticize her father’s love and marriage attitude. In fact, her father did teach his daughter to “trust your lover, rely on him and make him happy”. He was satisfied for teaching his daughter a meaningful lesson. Under Chan Wing Chuen’s sincere and natural interpretation, Tang Sai Him was joyful when he heard his daughter said, “Dad!”, which he had not heard for many years, proving that the family affection was not about money or material sacrifice, it was about whether there was a heart for the family.

In addition to being given the “valuable title”, Sai Him also received many “gifts” from her daughter. For example, her rearrangement of the house, and her appreciation of the apples planted by her father. The most impressive moment was when Sze Yu saw her father’s career difficulties and suggested that he should be more aggressive at work. Contrasting with Sze Yu’s ambition, Sai Him pointed out that his daughter was being too radical, showing that there was a generation gap between them. These plots realistically narrated the process of the father and daughter from reunion to getting along with each other, avoided the sense of idealistic or artificial. Tang Sai Him, who was accustomed to film photography, was learning digital photography and image modification techniques –  symbolisation of Sai Him trying to break the generation gap.

At the end of the play, the reason for Sze Yu’s return to Taiwan was not clarified, which made Sze Yu and Sai Him’s parting a little bit abrupted. Also, engaging in makeup was the only information about Sai Him’s cohabiting girlfriend Chiu Mei Mei. Compared with Sai Him’s previous girlfriends, she seemed to prefer a stable relationship. Although it is difficult to predict whether Sai Him will end this relationship again or not. The house program stated that Mei Mei came from the Mainland and held a tentative relationship with Sai Him. The relationship between Mei Mei and Sai Him was not impressive (although the lack of emotional scenes between Mei Mei and Sai Him in the play may not explain their declining relationship, it is just that the screenwriter may prefer to focus more on the father-daughter relationship). However, what kind of person is Mei Mei? The screenwriter should add more descriptions. What I want to praise is that Chan On Yin could clearly interprets Mei Mei’s traits through the limited portrayals, such as maturity, rationality, and understanding.

Detailly portrayed personalities of the father and daughter

The depiction of a character’s past enabled the audience to understand Sai Him and Sze Yu better, and how their words and deeds were affected by the past. For example, Sai Him’s humor contrasted his quiet ex-wife (Sze Yu’s mother). It was only after marriage that Sze Yu’s mother realised that she could not change her quiet personality. Personality clashes and Sai Him’s refusal of staying in Taiwan led to the divorce. Interestingly, Sai Him had similar interests and personalities to his children. Sze Yu’s interest in stand-up comedy, made her easy to get along with her humorous dad, and her brother was also good at photography. The sense of humor and photography were not only one of the motives that prompted Sze Yu to find his father, but also allowed the audience to witness the subtleties of personality and fate between kinship.

Tang Sai Him regretted to leave his family, and always longing to go back to Taiwan and reunite with his family. However, he was afraid of disrupting the pace of life of Sze Yu’s family. On the other hand, after the separation with her father, Sze Yu loved to draw her father on the photos. These two passages are full of contagious regrets. Firstly, although the father and daughter were separated, but they valued each other. Secondly, Sze Yu dared to act and was not afraid to break the norm. On the contrary, Sai Him had always been cautious, afraid of disrupting the life of Sze Yu’s family in Taiwan. This is like how he had to think carefully before pressing the shutter of a film camera. It was a delicate and consistent character portrayal.

“I Ought to Be in Pictures” ingeniously arranged Sze Yu to communicate with her deceased grandparents (i.e. psychic). She mentioned that the grandmother who had originally lived in Taiwan was now “at” her father’s house. The psychedelic speech seems to be inconsistent with the realistic style of the whole play. However, the fact that Sze Yu was always mentioning her deceased grandparents indicated she loves her grandparents, as well as her father. Sze Yu’s attitude contrasted sharply with her father’s, who frequently changed girlfriends. Sze Yu had become a good example for the father.

The original text is only available in Chinese: