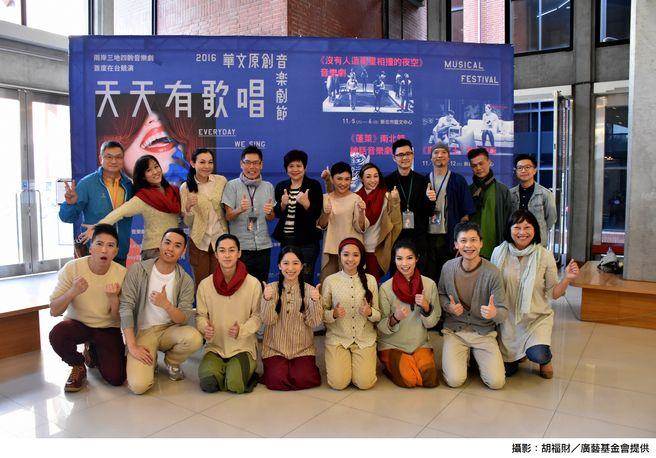 The “2016 Chinese Original Musical Festival” organized by the Quanta Arts Foundation for the first time, with the spirit of “original” as the main axis, will be deputed on November 5th to 27th at The New Taipei City Arts Center. The event invites musical works and creative talents from Taiwan, the Mainland, and Hong Kong.

There were 4 original musical performances from the Mainland, Taiwan and Hong Kong participated in the “2016 Chinese Original Musical Festival”. With the slogan “Everyday We Sing”, events such as “Outdoor Musical Singing – Plaza Carnival”, “Musical Performance Workshop”, “Musical Creation Competition Reality Show” and other exciting programs were held to create a comprehensive musical performance event exclusive to the Chinese region.

The festival is spearheaded by Hong Kong works. The work “A Bright Dark Night” by Pop Theatre embarked on a wandering journey in Tibet. Inheriting the musical traditions, concepts are creatively performed by the director Chan Wing Chuen. They interpret the mood through co-production, on-site color painting and combination of taste design to penetrate the audience’s spiritual space and experience the dynamic beauty of Zen.

The Shanghai Dramatic Arts Centre brought the musical version of “Queen of Coquetry” produced by He Nian and Hu Yanbin. This work is composed of more than ten fragments, which discuss the topics of blind date, confession, ex, sex, pure friendship, shopping, security, long-distance relationship, marriage, etc. The outstanding stage version has been performed nearly 200 shows in more than 20 cities in mainland China, including Beijing, Shanghai, Guangzhou, Nanjing, Shenzhen, etc.

Taiwan works include “Isle of Dreams” by La Cie MaxMind. The northern and southern wind music fluctuates and gently talks about the myths and legends buried in the ages. ” Isle of Dreams” is the second part of the trilogy of 《南北管神話音樂劇》. After the first part ” The Drought Goddess” represented Taiwan in the ” Festival OFF Avignon “, the director Li Yixiu once again integrated the traditional north and south wind music into contemporary vocabulary. It was combined with dance, puppet show, multimedia and poetry literature, to create a vast new epic story.

The other work is the BL series “Leviathan 2.0 ” by The Ex-rebel Lads. It interprets a youth story about jealousy and love with the background of street and internet culture. Directed by Huang Yuanwen, deputy director of Against Again Troupe and written by Jian Liying. Jiang Tao, who has just been nominated for the Golden Bell Award for best soundtrack, will once again create a fantasy world of male-male relations after the recent boom of《新社員》.

There will be 3 outdoor performances in the outdoor plaza on the first floor of Mega City. The Ex-rebel Lads will bring a romantic “BL Series Singing Party”, combining 20 original plot music to compose the love and friendship of high school students. In addition, 《達康.come說唱秀》 brought the most soothing time to office workers by Ada and Kangkang. The two demonstrated the healing power of funny comics. C’ Musical X will bring 《那些年我們一起唱的音樂劇》, re-connecting familiar, faint, and unfamiliar musical songs.